The Best Fishing in Michigan

Tahquamenon Country is home to some of the best fishing in Michigan for trout, salmon, walleye, smallmouth bass and northern pike.

The Upper Peninsula has one of the best fisheries in the world and the Newberry area is no exception. Luce County alone has 160+ lakes and numerous rivers and streams making for a wealth of water to explore. Fishing is popular year-round and each season offers different opportunities to target different species of fish. Tahquamenon Country offers some of the top fishing in Michigan and with a little practice and some luck you will soon be catching your limit of delicious trout and walleye and possibly hook a trophy size northern pike or muskellunge.

Before you head out fishing be sure to get a license and familiarize yourself with the fishing seasons and regulations. The Michigan Department of Natural Resources also has a wonderful website to help you locate boat launches/access sites.

Four of the most popular fish species in Tahquamenon Country

The trout and salmon fishery in the Upper Peninsula is exceptional. There are a variety of species including steelhead, brown trout, rainbow trout, brook trout, lake trout, splake, coho salmon, chinook salmon, pink salmon and atlantic salmon. There are a wide variety of fishing techniques (including spin castings, trolling and fly casting) depending on the season and the location. Trout species can be found in both Lake Superior and the region's rivers and streams along with a few inland lakes. Salmon are caught in the deep waters of Lake Superior year-round and are caught in rivers and streams in the late summer and early fall when they are ready to spawn.

Lake Superior, and some of our inland lakes, are home to an abundance of walleye and they are one of the most prized fish to catch and eat in the Upper Peninsula. Season and time of day dictate where and when to fish for walleye. Generally speaking, it is best to fish in the morning, evening or after dark. In the spring and fall they can often be found in shallower water whereas in the summer (especially during the daytime) you will need to seek them out in deeper water near the structure. It is important during any season to keep moving until you find fish, once you catch one keep working that area. Popular methods for fishing are trolling with crankbaits or nightcrawler harnesses as well as jigging.

Northern Pike & Muskellunge are well-known for being aggressive feeders and putting up a great fight. Northern Pike & Muskellunge are separate species but often inhabit the same environment and are caught using the same techniques. These fish tend to prefer shoals, bays and the mouths of rivers and streams. Overall, weedy areas tend to be good locations for targeting these fish. In the hotter summer months however, you may have to fish for them in deeper cooler waters. Most anglers use lures for these fish including spoons, crankbaits and spinnerbaits.

Smallmouth bass are very abundant in the waters of Lake Superior and some inland lakes. These popular fish spawn in the spring and can be found in shallow water. As the temperature rises, they move toward cooler waters deeper in the lake. In addition to spring, fall is a great time to fish for smallmouth. When fishing, look for areas with rocky outcroppings, gravel and structure near deeper water. For lures try small to medium-sized crank baits, spinners, jigs and rubber worms or nightcrawlers or minnows.

Listed above are only a few of the most sought-after species that you might catch. You can also find whitefish, largemouth bass, catfish, perch, bluegill, black crappie and many more.

Fish from a watercraft, by wading or from shore

There are so many ways to get to the fish. If you have a boat be sure to bring it, this will give you the most flexibility for choosing a location, including Lake Superior, inland lakes with boat launches and the larger rivers. A kayak is another wonderful option for accessing many locations including the small lakes and streams and carry-in locations. However with a kayak use caution on Lake Superior and stay close to the shore, the weather can change quickly on the big lake and you want to make sure that you can make it safely back to shore if it does. Waders are also an excellent option, especially when fishing for trout and salmon in the rivers and streams. There are also plenty of options for fishing from shore, whether it be from a pier, dock, the bank of an inland lake or the beach along Lake Superior. If you really want to make the most of your fishing trip consider a guide or charter boat. These experts will help you find active fish and hopefully put you into the right spot to catch a trophy.

Popular and productive places to fish

There is such an abundance of places to fish that it would be difficult to list them all. Below is just a short list of popular places that are either easy to access or likely to provide anglers with a catch.

This small lake has a boat ramp and floating dock and is a great place for kids to fish for panfish and bass.

Bodi lake is a great place to fish via kayak and is popular for northern pike, bass, walleye and perch.

This small lake has a boat launch and is popular for walleye, northern pike and bluegill.

Lake Superior is a productive fishery all year round and boasts substantial populations of trout, salmon, walleye, northern pike, smallmouth bass and whitefish. Different species have specific times of the year when it is going to be most successful to fish for them. Generally speaking spring, early summer and fall are the best times to fish. Ice fishing is also possible in some areas however it is subject to ice conditions. Because of the size of the lake it is important to research locations in advance. There is a chance that you can catch a fish just about anywhere, however there are certain areas that are more productive such as the mouths of rivers and streams, bays and dropoffs. Contact local tackle shops for information about where to fish while you are in the area.

Little Lake is connected to Lake Superior and has both a boat launch and a dock. Anglers can catch northern pike, perch, walleye, bass and panfish.

These lakes provide a wealth of fishing opportunities by boat, kayak or from shore. Species to target include walleye, muskellunge, northern pike, bullhead, bass, perch and bluegill.

Muskallonge Lake is an excellent location for northern pike,muskellunge, smallmouth bass, walleye, perch and other panfish. A boat launch within the park provides access to the lake.

Perch Lake can be fished from a boat, kayak, and there are some limited opportunities from shore. Popular species include bass, northern pike, perch and splake.

Another great place for kids to fish is Shelldrake River Flooding. You can use a boat or kayak to fish this flooding or fish from shore near the dam. Popular species to fish for here are northern pike and perch.

The Two Hearted River is renowned for its trout and steelhead and has one of the best runs for salmon in the Upper Peninsula. There are multiple access sites along the river from which to launch a kayak or wade; some sections are also perfect for boats. Seasonally the mouth of the river is popular for species such as menominee, whitefish, steelhead and salmon.

In addition to fishing tackle bring these items

Be sure to pack bug spray, sunblock, and a light jacket to accommodate for the ever-changing weather in the Upper Peninsula. Additionally, you might also consider packing snacks, water, a cell phone, flashlight, compass, fire starter kit, pocket knife, an emergency blanket and a camera to capture your trophy catches.

As a premier fishing destination in not only Michigan, but the world, you will want to start planning your adventure to Tahquamenon Country today. 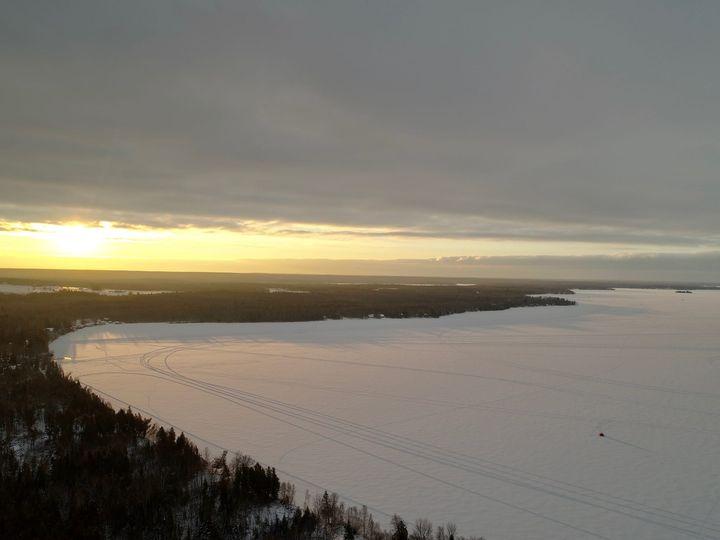